A post from Setpember 2016 mentions the  TVAF Dementia Poetry Project

The video below shows the performance piece staged as part of the TVAF 25 year celebrations at The Lights in Andover on Thursday 17th November. Thanks to Anna Carr for stepping in to read Caro Reeves’ part  when Caro had to drop out due to illness. This includes words from dementia patients and their carers, overheard snippets at Demfest, and Caro’s descriptions of incidents with hospital patients.
(Yes we know it’s TeaPoet, not TeaPot !)

This piece was followed by young people from the Barton Stacey Village Independent Player Youth Group performing ‘The Scandal of the Andover Workhouse’  and after the interval  ‘And Now We Tell Our Tale’ showed the impact on Andover of the overspill from London  during the redevelopment of the late 1960s and early 1970s.  There was certainly a lot to be learned about Andover’s history (at least from the perspective of a non-Andoverian). After the evening’s performances in the theatre, we were treated to music from The Might Hump in the foyer.

The objective of the TVAF@25 project had been to celebrate 25 years of the Test Valley Arts Foundation through 25 different projects throughout the autumn of 2016.  This way it planned to maximise engagement with the public, and the full house in the Lights theatre for the evening’s event proved how successful it had been.

The creators of the dementia performance (which I have given a working title of Lost) are hoping to develop the piece further. Ideas include the use of projections and music. Watch this space !

Words In The City – Sunday Afternoon at the Stage Door 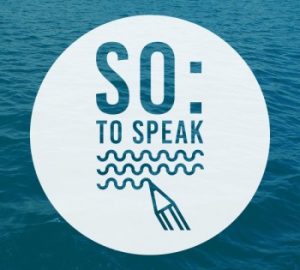 I spent all Sunday afternoon at the Stage Door, which doesn’t mean I was hanging around for autographs.  SO: To Speak put on a free afternoon of scratch shows, music, and conversation at the Southampton venue of that name. 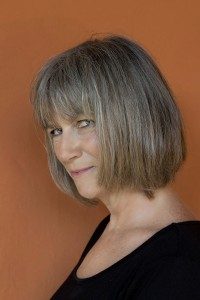 First up was Nell Leyshon performing Three Letters, which is scheduled to be part of the Hay Festival in May 2017. Nell gives a vivid and moving account of the experience of her diagnosis and subsequent treatment for breast cancer, including the debilitating side effects of the follow-up medication. This piece brings home the point that quality of life can be more important than recommended medications, and gives an interesting insight into the cold statistics used to influence patients’ decisions. 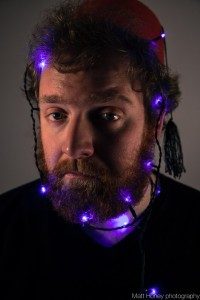 The next act , Craig Chalmers, introduces us to his one-man poetry jukebox. He invites the audience to make selections from the library on his iPad. Every request gets a special prize. I won’t give any spoilers here, but there are some very unique gifts to be taken away after the show. He writes about death, and life, and all the bits in between. Craig’s full show The Craig Chalmers Experience will be touring next year. 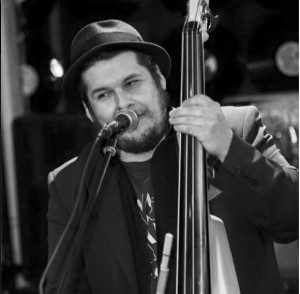 Grant Sharkey is a man with a double bass who is on a mission to make 2 albums a year. So far he has succeeded. Before long we are all singing along to sections from his latest release on the theme of Rupert Murdoch. The latest CD has been sent to Mr Murdoch, along with a letter challenging his distorted portrayal of the world. How long before the “dirty digger” unleashes his lawyers? Watch this space !

After a break Catherine Wright takes to the stage for In Conversation With … Matt West, and Leigh Taylor. Matt West will be familiar to anyone even remotely involved with the spoken word scene in Southampton. We are treated to some interesting insights into Matt’s early life and his unconventional career progression.

For the second interview, Leigh Taylor (aka “urban storyteller” LST) talks about his early interest in music, the ups and downs of being an emerging artist in the music business, and gives useful advice for budding songwriters on keeping material close to reality rather than trying to create a false persona. We are then treated to a stunning performance of three songs from his acoustic band. 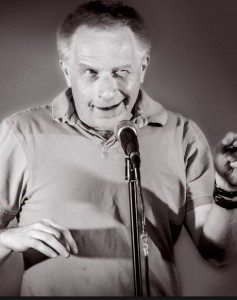 To finish us off (and this is meant kindly, as he kills us softly with his humour) Stewart Taylor presents Spillage. A series of poems based on anagrams of the word “spillage” is cleverly linked with the theme of spillage of liquids. We are even invited to participate in a quiz about liquids and the correct way to deal with certain spillages.  This is not so much a spoken word show as a melange of drama, slapstick, and scientific fact. And thank goodness for that.

All in all, an afternoon of varied and top-notch shows – which probably explains how 4 hours passed like no time at all.  As someone who has spent many hours at the Edinburgh Fringe, not necessarily with the same level of delight, I appreciate the privilege dealt to the Southampton audience with this finely curated line-up.

This years festival was, apparently, a “holding event”, so watch out for a truly staggering programme in 2017 !

Reportage By The Sea – NAUTILUS by Trygve Wakenshaw 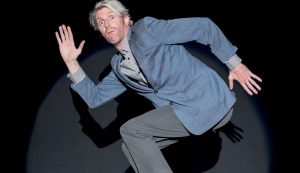 Reportage By The Sea – What I Learned From Johnny Bevan, Luke Wright

What I learned from Johnny Bevan, Luke Wright – Review by Syd Meats

Posted in Poetry, Theatre Reviews Tagged with: Artfulscribe, Arts By The Sea, Bournemouth, Luke Wright, New Labour, Reportage By The Sea, Shelley Theatre, Urbania, What I Learned From Johnny Bevan 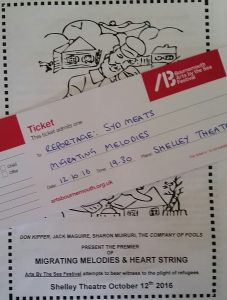 Reportage By The Sea – Launch Event 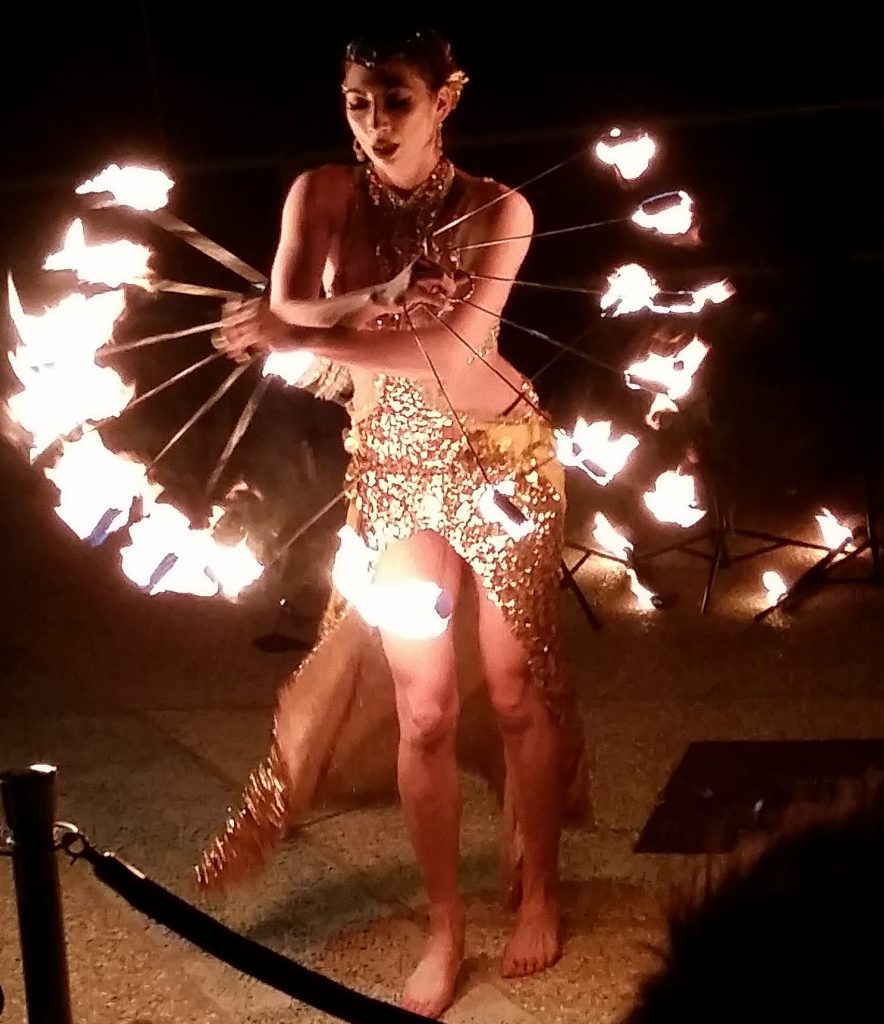 I attended the  Arts by the Sea Festival Launch on the evening of Friday 7th October.
The link above is to the Reportage By The Sea blog, where you can see a couple of creative responses to the event (a technique covered by Mark Fisher in his workshop on 1st October). Gemma Alldred has covered the launch event in the form of a play review, whilst I chose the format of a shipping forecast.  I would have liked to have spent some time researching the format of a shipping forecast, but Matt West is trying to get us used to the idea of journalistic deadlines !

The photo above is of Aurora Starr, who gave us a spectacular end to the festival launch at the front of Bournemouth Pier. I took this on my Samsung smartphone (which thankfully wasn’t a Galaxy Note 7, so no pyrotechnics there !) 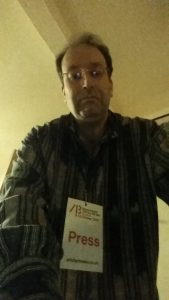 This is me with my press pass !
Something that was covered in the Reportage By The Sea workshop on Sat 1st October was the idea of a creative response in a review. I’ve applied this to Reverend Productions Jekyll and Hyde / Nerve Double Bill, as staged at the Shelley Theatre on Friday 30th September. 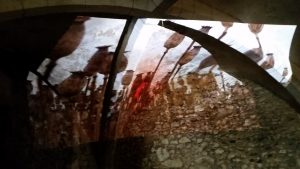 I was lucky enough to catch this on what was originally planned to be its penultimate day (30th Sept ), and to also have a chance meeting with filmmaker Anna Cady.  This installation came about through various poets being asked to respond to a piece of film from which the soundtrack had been removed.  The poets were recorded reading their works, and this became the new soundtrack.

All the pieces picked up on the theme of mortality. This was poignant as the film was a collaboration between Anna Cady and fellow filmmaker Pauline Thomas who passed away due to a terminal illness during the making of this project. The installation consisted of a projection of the film onto the ceiling of the Cellarium at Mottisfont, with voices and the occasional instrumental piece echoing around the vault.

I recognised some familiar voices such as Hampshire poet Joan McGavin and (now) New Hampshire poet Brian Evans-Jones.  During the course of the hour-long piece, an occasional poem was read without accompanying images, which I felt worked well in avoiding over-stimulation of the senses. During pieces referencing the First World War, I found the images of swaying poppy seed heads suggested the outlines of soldiers in the trenches. For me the words had as much influence on my viewing of the images as the images did on the spoken word.

I felt that  this was an inspired and superbly executed idea. The atmospheric setting of the crypt allowed the words to resonate both literally and metaphorically with the listener.  I forgot to ask if Anna Cady had further projects of this nature planned, but I hope this is the case. 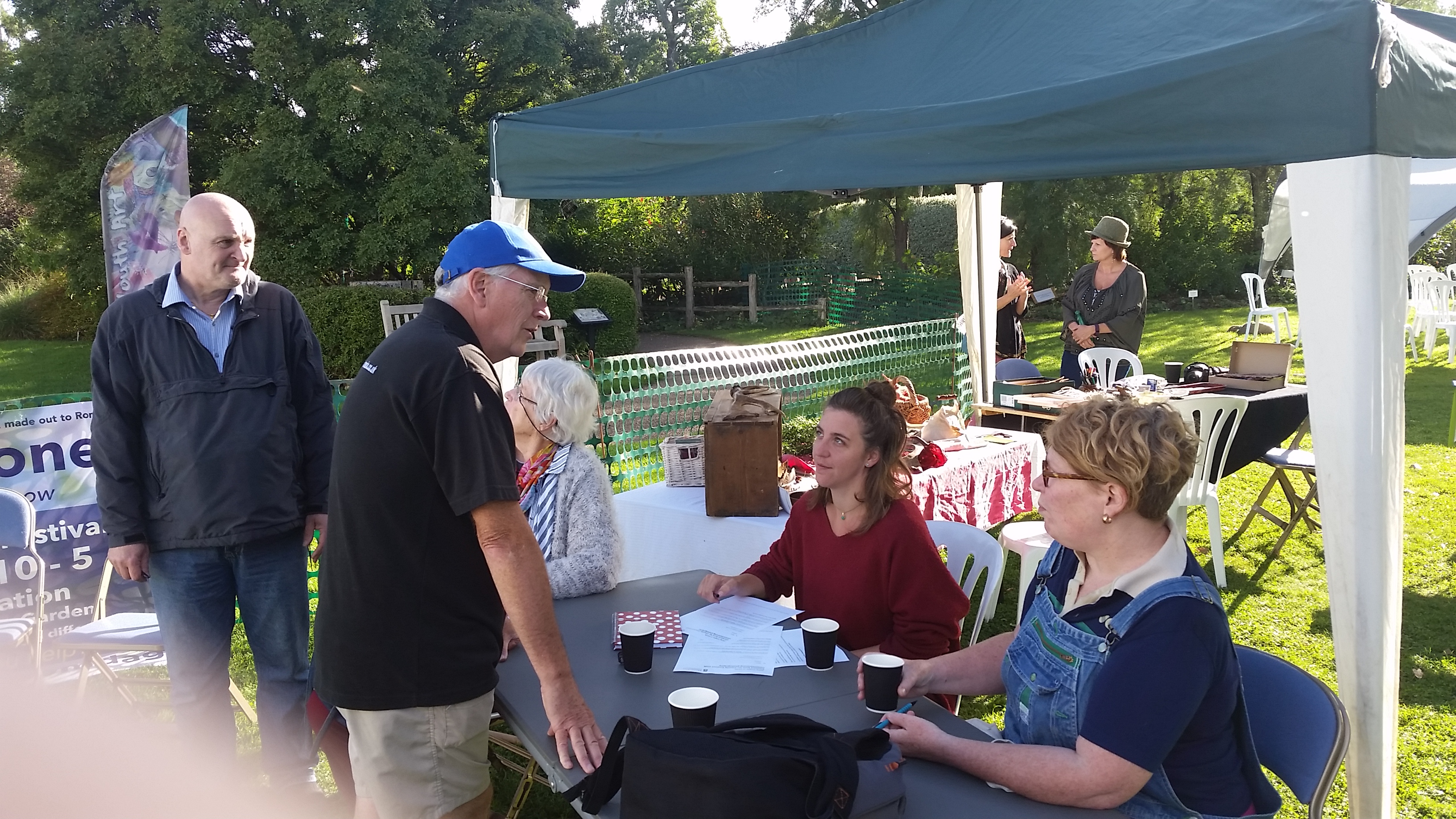 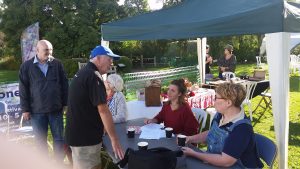 As part of the celebration of 25 years of the Test Valley Arts Foundation, today I was leading a group of poets in collecting stories and reminiscences from dementia patients and their carers. We will be using this material to create a performance piece for an event at The Lights in Andover on 17th November.
Catherine Wright, Anna Carr, Caro Reeves and Damian O’ Vitch (pictured) were joined by Andy “Papa” Webb. Thanks to John Baxter of TVAF (pictured in the bassball cap) for inviting us. 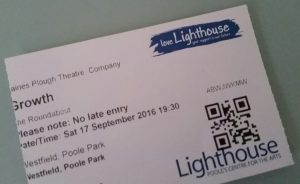